Ohio University’s Voinovich School hosted a Lunch and Learn with Reem Aly on October 16 to inform participants about the connection between race and health disparities in Ohio. Attendees learned of the negative health outcomes that unequally affect Black Ohioans and Ohioans of color.

The data was presented by Reem Aly, the vice president at the Health Policy Institute of Ohio (HPIO) a nonprofit organization. HPIO’ s mission is to provide nonpartisan data to aid in the creation of well-informed state health policy. The non-profit is funded by 13 foundations including Mercy Health, The Cleveland Foundation and Sisters of Charity Foundation of both Canton and Cleveland.

In order to give the accurate data, HPIO created the Equity Advisory Group, who define health equity as the following:

“Everyone is able to achieve their full health potential. This requires addressing historical and contemporary injustices and removing obstacles to health such as poverty, discrimination, and their consequences, including powerlessness and lack of access to good jobs with fair pay, quality education and housing, safe environments and health care … Health equity means reducing and ultimately eliminating disparities in health and its determinants that adversely affect excluded or marginalized groups including but not limited to by demographic, social, economic or geographic factors.”

Totaled in the same list of 18 countries, the U.S. life expectancy is just 78.8 years, compared to 83.9 years in Japan. For Ohio, this ranking is very similar. 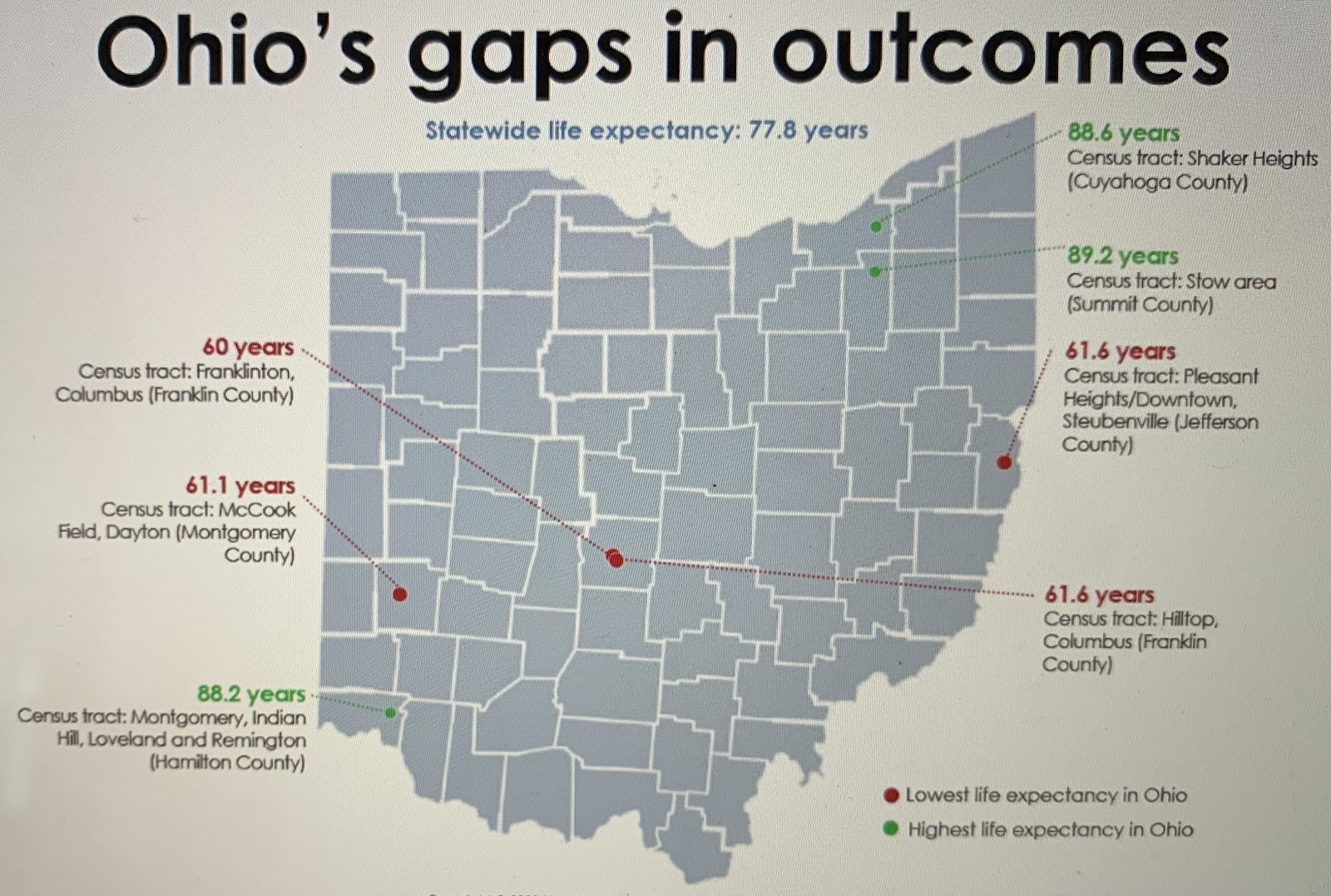 Recently, the Voinovich School of Leadership and Public Affairs teamed up with HPIO to study the effects of childhood trauma. Professor Anirudh Ruhil and Christelle Khalaf, economist for the Voinovich school, were leading members of the team. The research concluded that Ohioans of color are the most at risk for adverse childhood experiences which lead to lasting negative effects later in life.

These adverse experiences can ripple throughout generations, a topic which Aly presented to viewers. Incarceration, improper access to healthcare and the writing off of a patient’s concerns are all reasons that many people of color have an understandable, and long-lasting, mistrust of the healthcare system.

Often, the health concerns and questions of patients of color are overlooked, leaving the person without proper access to care and treatments. One of the highest indicators of this is seen in maternal and infant mortality. According to Aly, Black Ohioans experience 2.5 times the rate of infant mortality than white Ohioans.

“The impact of racism is cumulative – it compounds within a person’s lifetime and it compounds across generations,” Aly said.

Mass incarceration is another of the systemic cumulative factors that holds an unequal grip on Black people and people of color.

“Within the criminal justice system, racial inequities are deep and systemic, dating back to slavery … These inequities are also rooted in more recent history, such as the war on drugs,” Aly said. “From 1960 to 1990, there was bipartisan support for a series of tough on crime policies. These policies resulted in dramatic growth of our prison population … that disproportionately impacted men of color nationally.”

Black or African American Ohioans are incarcerated in state prisons at five times the rate of white people, Aly said.

“Once [people of color] exit, the criminal justice system can restrict their ability to vote and has severe impacts on the health outcomes, not just of that individual but also their family and community,” Aly said.

COVID-19 has only worsened the divide in health outcomes, leaving people of color more at risk to contract the disease.

“Over the past several months, the link between racism and health has been grabbing the nation’s attention, particularly as we see how COVID-19 is impacting communities of color, and in light of protests and public calls to address racism and police brutality.”

According to the Ohio Department of Health Coronavirus Dashboard, presented by Aly, Black and African American Ohioans make up about 13 percent of the state’s population, but account for larger percentages of COVID-19 cases, hospitalizations and deaths.

Racism continues to put health obstacles in place for communities of color in the U.S., but improvement is possible and it is important to understand the levels at which it exists, Aly said.

In order to tackle racism, it is important to understand the levels at which it exists, Aly said.

The most effective way in which people can be allies and promote equal health outcomes in Ohio is by acknowledging that racism is a crisis. Individuals can educate themselves by listening to podcasts, joining discussion groups and participating in implicit bias or equity training.

On a larger scale, public and private organizations can educate their staff and clients on the health disparities that affect people of color. Organizations also must advocate for and implement anti-racist programs that dismantle racism and advance equity.

Authors note: A few books that I have found helpful are White Fragility and So You Want To Talk About Race, both of which can be found through OU’s ALICE library system. Podcast episodes that are incredibly informative include, “Reproducing Racism” by Reveal or “A Decade of Watching Black People Die” by NPR’s Code Switch.